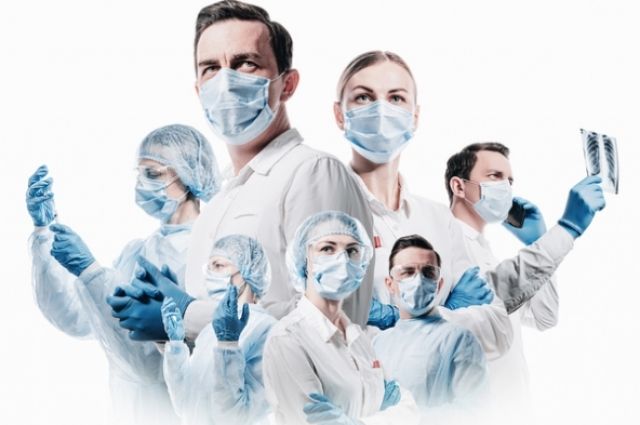 The most important problems that the national project “Healthcare” is designed to solve, — elimination of personnel shortages in the industry, increasing the prestige of the medical profession and professional retraining of specialists. It is planned that by 2024 the staff of doctors and nurses in polyclinics will be at least 95% of needs, and by by the end of 2024, there will be almost 10% more doctors in Russia.

On the eve of Medical Worker's Day, there is a reason to talk about some of the most worthy representatives of the profession.

In Adygea, the contest “The Best Doctor of the Year” has ended. It was decided to present awards to the best doctors on June 17 at the State Philharmonic of Adygea. And here is the name of the winner of the interactive voting (one of stages of the competition) of the inhabitants of the republic is already known. Alla Degtyareva, a district pediatrician of the Maykop city children's polyclinic, has become the head of .

There is a medical dynasty in Bashkortostan, the total experience of which already exceeds 200 years. Everyone works there as doctors — parents, brothers, children, their wives and husbands. This is the Salavatovs family, natives of the Sterlibashevsky district.

The first to decide to connect his life with medicine Mudaris Salavatov. A well-known surgeon in Sterlitamak for many years headed the surgical department of the Mashzavodsk hospital. Now Mudaris Khamitovich works in a medical clinic  Neftekamsk, where his daughter Dinara — therapist, endocrinologist and her husband Abdulla Fazletdinov — urologist, candidate of medical sciences. Their daughterLuzia continues the family tradition — graduates from Kazan Medical University.

—— Gambaris, who became a dentist, and Akhnaf, who for many years headed the intensive care unit of the city hospital No. 2. After opening a dialysis center in Sterlitamak, Akhnaf Khamitovich moved to work there, and his native department is now headed by his son Rustam, who from childhood dreamed of becoming a resuscitator, like his father.

"Father is a model for me in  reanimatology and in general medicine — says Rustam. — After college, I wanted to work next to he, because better than my father in the nuances of our profession, which is akin to the professions of a firefighter, astronaut, pilot, nobody will initiate me».

Akhnaf's wife and Rustam's mother is also a doctor. Venera Muksinovnahead of the therapeutic department of the Sterlitamak City Hospital No. 1. With husband Akhnaf Khamitovich this summer they will celebrate a coral wedding — 35 years. And if we consider that this couple was also friends from the first year of the institute, then her total life experience is more than 42 years.

Looking at father, Rustam also chose a doctor as wife. Adelineis currently undergoing clinical internship in resuscitation. Apparently, in the Salavatov family, love for medicine and the desire to treat people is transmitted by blood. And the choice of any other profession is perceived as an exception to the rules.

The National Project "Healthcare" helps to attract specialists to remote areas of the country. For example, in Chuvashia, one of the first program “Zemsky doctor” traumatologist-orthopedist of the Morgaush Central District Hospital Alexander Nikolaevich Grigoriev began working.

«Attracted by tempting conditions — did not have time to work, how he became a “millionaire” (Under the “Zemskoy Doctor” program, doctors receive from 1 to 1.5 million rub— Ed.). Bought a large piece of land. He built a house on it with a bathhouse, a pool, billiards, a gym and a winter garden. He built the house for his parents, they like to do gardening. The second attractive moment — not very far from the city. After all, I was born and raised in Cheboksary», — says Alexander Nikolaevich.

Having completed the prescribed five years of the program, the young doctor stayed in the village of Morgaushi and has been working there for more than 10 years. Performs the full range of surgical treatment for patients with injuries of the musculoskeletal system and their consequences, emergency operations. Conducts a consultative reception.

The question of choosing a profession has never been  — — the doctor continues. — My father, Grigoriev Nikolai Yakovlevich, worked for a long time as a traumatologist in the Republican Clinical Hospital. From childhood, I listened to his stories about the operations performed, visited at work and watched people in white coats. Mother, Deverinskaya Alexandra Timofeevna, world champion, three-time world record holder in  race walking, also invested in my upbringing the spirit of winning, being strong and  hardy, resolute in actions, which is important in the profession of a surgeon and traumatologist».

< p>After graduating from the medical faculty of the Chuvash State University, Alexander completed an internship in traumatology at the RCH, then — in surgery, then got a job in City Clinical Hospital No. 1. And when I found out about a vacancy in their specialty in the village, I went without thinking.

“Working in the village cannot compare with a city hospital. Here it is more complicated, but more interesting — says Alexander Nikolaevich.       come consultation and treatment from neighboring districts, and even from the Mari Republic».

Another rural doctor — Anastasia Kozlova. She became the head of the rural feldsher-obstetric station immediately after graduating from the Cheboksary Medical College in & nbsp; 2021, specializing in obstetrics. And now he is in charge of two FAPs of the Krasnoarmeisky district: Polaykasinsky and Albakhtinsky.

In her responsibility —— 6 settlements, 330 permanent residents, average age — 50-60 years old. One of FAPs — Polikasinsky — brand new, built thanks to the national project “Health”. And Anastasia opened it herself. It serves 180 people. Equipped with an ECG machine, a device for measuring blood glucose levels, a pulse oximeter, a tonometer and other modern equipment. The second, Albakhtinsky FAP, is also waiting for transformation in the near future, they plan to build a new building for it. Any resident can apply to Anastasia Alekseevna and undergo the necessary examination as part of a medical examination, medical examination, or in case of a complaint about health. And if the health indicators are not normal, then the doctor will issue a referral for consultation of a specialist of the central district hospital.

In Khanty-Mansiysk Autonomous Okrug on the eve of the Medical Worker's Day in as part of the Will the Disease» Patients were able to personally meet  health care workers who helped to come illness, taught them to walk again, gave new life and the opportunity to hug their loved ones. This is also important — emphasize the importance of a trusting relationship between the doctor and the patient. After all, it is possible to defeat the disease only by joint efforts.