Bow Wow says he and Diddy had a hour long conversation about him dating his baby mama, Joie Chavis.

For months fans have been speculating that Diddy and Joie Chavis are in a relationship. The rumor that they shared a relationship intensified after the pair were spotted several times together, including when they shared a passionate moment on a yacht. Now it seems that Bow Wow has inadvertently confirmed that they are, in fact, a couple.

Joie’s ex, Bow Wow, spilled the tea after stating that he and Diddy had an hour-long FaceTime call about the relationship. He made the comments during a recent interview. The rapper jokingly said that he wanted to hash it out with Diddy before adding that he did not have any feelings for his ex for more than a decade now.

“I wanted to kill [Diddy],” he said after being asked if either Diddy or Joie gave him a call to get his blessing. He explained that he and Joie have a great friendship and parenting relationship.

“Nah, I’m playing. [Joie and I] haven’t really been in that place for probably thirteen years. Really, that’s a homegirl, my daughter’s mom, so it’s always gon’ be respect. But don’t think that I put a call in to talk to her about what the hell was going on,” he said.

He also confirmed that Diddy reached out to him. “And even me and dude, we spoke about it too. That’s a conversation that I won’t share but it was a good hour-and-fifteen-minute conversation on FaceTime,” he continued.

As for Bow Wow, he also seems to be looking for love, as he recently reached out to his ex, Erica Mena, urging her to “keep yo head up” as she and Safari go through a divorce. The rapper and Mena were briefly engaged in 2014 before breaking up a year later.

He also recently reached out to another of his ex-girlfriends, Angela Simmons, on Twitter. They dated before he and Erica Mena. “Yo @AngelaSimmons im not playing w u no more. Wassup? What we doing,” he asked on Twitter.

A post shared by The Neighborhood Talk, LLC (@theneighborhoodtalk)

Bow Wow seems to be keeping up with his ex-fiancee, Erica Mena, and sends her a comforting message as she goes through her divorce with Safaree Samuels and news coming out that he is seeing someone else.

The couple appears to be on a rollercoaster with their relationship leaving fans wondering if they are truly going through a divorce or if the meltdowns by Erica Mena are just part of the storyline for them on the Love & Hip Hop Atlanta reality TV show.

Last weekend the couple appeared cozy as they partied. That was a different scene from Erica Mena sharing videos from a party where she told patrons that she was celebrating her divorce and that the event was a divorce party. She urged people to “pray for him,” in relation to Safaree.

Days later, Erica came with a new meltdown, and people just can’t take her seriously. However, it seems that Bow Wow, who was engaged to Erica Mena, knows her more than others who aren’t taking her meltdowns seriously.

Bow Wow posted a message fans think was aimed at Erica. “Erica keep yo head up,” he said. 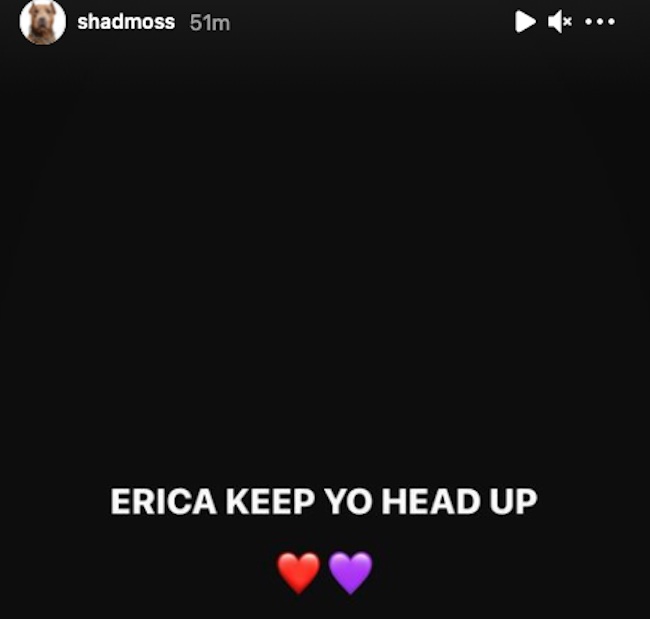 Erica Mena and Bow Wow dated briefly and were engaged in 2014 but broke up in 2015. The two did not have a smooth relationship, with Erica throwing shots at Bow Wow after the breakup and even saying that he was abusive and at one time broke Ciara’s finger when they dated.

Bow Wow, on the other hand, did his fair share of responses as he threw subliminal shots at Erica and even trolled her online, referring to her as “bad women” and dating “goofy dudes.”

Things got nasty between the pair, with Erica even suggesting online that the rapper might have had a “small package” after he threatened to leak her sex tape.

Meanwhile, Bow Wow seems to be going after his exes, and Erica is not the only one. Today he checked up on Angela Simmons, who he dated before dating Erica Mena.

“Yo @AngelaSimmons im not playing w u no more. Wassup? What we doing,” he asked on Twitter.

Yo @AngelaSimmons im not playing w u no more. Wassup? What we doing ?

Bow Wow’s latest antics come days after his first daughter’s mother Joie Chavis was seen on a yacht off the coast of Italy kissing with Diddy as he groped her in various photos.

Bow Wow, who has always spoken highly of Diddy as a father figure who taught him about family, has not spoken about Chavis and him possibly dating. He and Chavis are reportedly on good terms, however, as they co-parent their 10-year-old daughter Shai Moss.