Beenie Man questioned why embattled former Minister Floyd Green has not been charged with breaches of the Disaster Risk Manager Act, DRMA.

King of the Dancehall, Beenie Man, does not appear pleased at the punishment meted out to Agriculture Minister Floyd Green, who resigned from his post on Wednesday and assumed a backbench position in Parliament.

The Minister and his friends, including a number of high-ranking JLP members, were seen in a viral video toasting to No Movement day as Jamaicans stayed indoors and abided by the restrictions imposed by the Prime Minister in an effort to curb the spike of coronavirus infections on the island.

The video caused outrage among the Jamaican population, particularly Beenie Man, who doesn’t seem satisfied that the Minister was sufficiently punished. Drawing reference to the idea that two Jamaicas exist as the laws and rules tend to favor the richer, more affluent uptown people, Beenie Man asked if the Minister and his friends would be charged as well.

The dancehall legend also noted that police charged him for only making an announcement promoting a party.

“I was charged and fined for an announcement! What is the consequence of actually planning and attending??? Will they be arrested?? Charged?? Or fined??? #Jamaica,” Beenie Man tweeted a day after news broke that the Minister was stepping down from the Cabinet.

I was charged and fined for an announcement!

What is the consequence of actually planning and attending???

Will they be arrested?? Charged?? Or fined??? #Jamaica

Beenie Man also clarified his comments as he pointed out the double standards of the Jamaica Constabulary Force.

“This is not just about the party or no one individual. This is about the DOUBLE STANDARD, THE MOCKERY TO EVERYONEAND THE DISRESPECT TO WE THE PEOPLE. I watched the video and felt shame. How did you feel watching the video,” the deejay asked in a comment response to his earlier tweet. 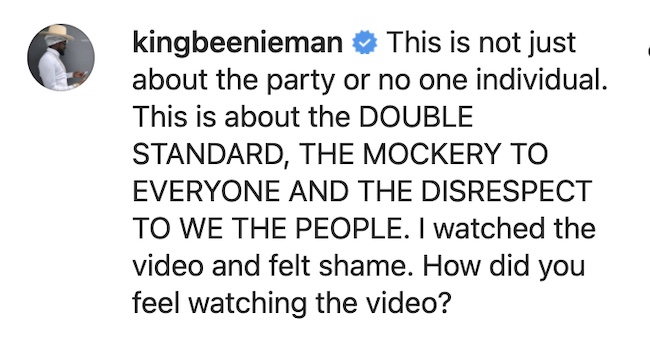 On Wednesday (September 15), Prime Minister Andrew Holness announced the withdrawal of the Minister, noted that the video has been referred to the JCF to determine whether charges would be laid.

Meanwhile, in a cruel twist to the many persons who paid the price for breaching the DRMA measures and now have a spot on their police record, supporters of Green on Thursday launched an online petition to reinstate the Agriculture Minister as they cited his impeccable work as Minister.

It’s unclear whether the Minister will be reinstated, and there is no word on whether he will be charged and placed before the court like ordinary persons.