Sterling, like so many other Jamaicans, is currently mourning the death of socialite Steffie Gregg, who is also the niece of record producer Rvssian. Her death sent shock waves through the local celebrity community on Tuesday when news broke that she passed away from complications of Covid-19. She reportedly had an underlying illness, Lupus.

Gregg and Raheem Sterling have been close friends for years, and naturally, he too, is deeply saddened by her sudden passing. The Manchester City forward wore an under jersey T-Shirt honoring her with the message, “Love You Forever Steffie Gregg.”

Sterling netted a goal in the 55 minutes to help England defeat Hungary 4-0. “This one was for you SVG,” the footballer wrote while sharing images from the game.

According to Rvssian, Steffie Gregg had a lot of love and respect for Raheem Sterling. In 2018, she shared a photo of herself wearing his number 7 Manchester City jersey at one of their games.

“This brought so much tears to my eyes LOVE YOU FOREVER STEFFIE,” Rvssian wrote on IG. “@svg876_ Steffie your name will be remembered thank you @sterling7 for being a great friend and doin this. Real people do real things. She always had so much respect and love for you.”

Rvssian Niece, Steffie Gregg, Dies At 26, A Week After Losing His Father

Rvssian’s family is once again mourning the loss of another family member a week apart.

The Jamaican producer’s niece, Steffie Gregg, was pronounced dead on Tuesday as thousands of her followers reeled from shock of the news. While her official cause of death has not been released, the 26-year-old young woman’s death has rocked the island not only her friends and family but others particularly the island’s large group of anti-vaxxers who believe Covid-19 is merely a simple flu.

Steffie Gregg is said to have been living with Lupus and had only received one shot of the AstraZeneca vaccine, not enough to have developed full immunity from the virus.

Among those mourning her death are her uncle and many of her celebrity friends online.

“I can’t believe I’m reading rip under your comments Steffie. I’m broken. I love you so much god knows it wasn’t your time. Id [sic] give it all to have u back,” Rvssian posted along with several crying emojis and almost a dozen heartbroken emojis. The Jamaican producer also lost his father last month.

Gregg was a businesswoman and was also a well-known socialite among the Upper St. Andrew community.

Popcaan also commented on news of her death- “No way,” he said. 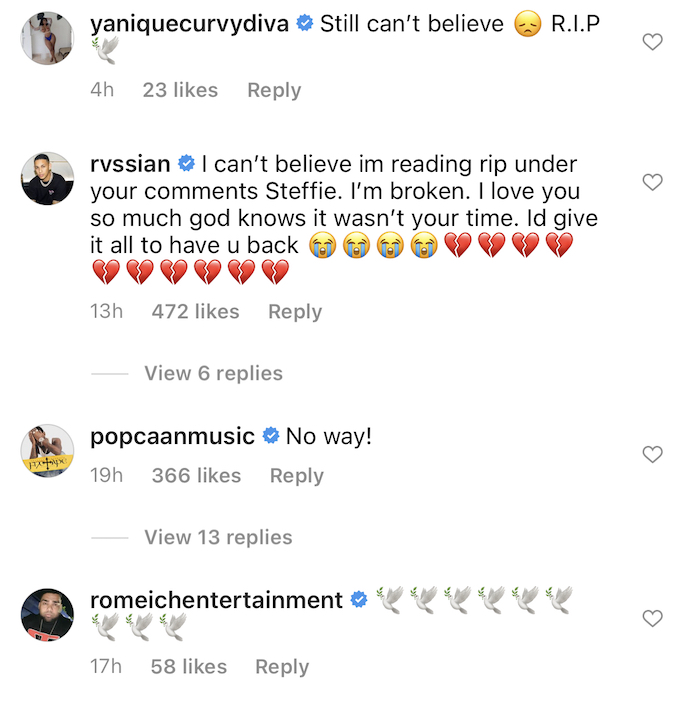 Meanwhile, hundreds of people have taken to the young lady’s Instagram as they expressed condolences. Among her many friends reacting are Aston Villa winger, Leon Bailey and former track athlete Warren Weir among others.

In furthering his reaction, Rvssian shared several photos of himself and Steffie over the years. “I feel helpless my little Steffie @svg876_ I feel I failed you and couldn’t protect you from this,” the producer wrote. “You don’t know until it hits home I lost you & daddy in the same week You were one of the happiest persons Ever & always had a great vibe & you lit the room up with your energy.”

“You taught my daughter adri the wine dance moves haha you guys remind me so much of each other,” Rvssian continues. “The hardest part was explaining to her that she will never be with you again was so hard when she cried out for you She loved you so much and looked up to you.”