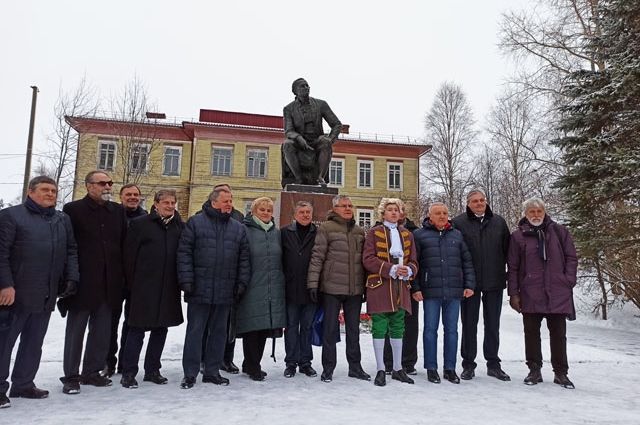 Left and did not return

The ferry hums monotonously and trembles shallowly, and light ice floes beat against its side. It's already winter in the Arkhangelsk Region: the rivers have not yet risen, but the horizon is hardly distinguishable due to the snow, and a snow-ice porridge glides and swirls over the water. In fact, the navigation season was closed a couple of weeks ago, but for the sake of the arrival of distinguished guests, they made an exception: they allowed the crossing.

The ferry smells like a stove and wood. Passengers & mdash; academicians and correspondent members, journalists and officials – dancing from the cold, look at the dirty yellow ice floes and at the coast of Kurostrov approaching from under the gloomy Pomor sky. The president of the Academy of Sciences Alexander Sergeev looks at him, thinking about something of his own.

What he thinks about in half an hour will be pronounced at a rally at the monument to Lomonosov: “ I think many of us who have come here want to get a feeling from contact with this land, with this village, in order to understand for ourselves how we are born geniuses and why Lomonosov was born here. Our hopes are connected with his name that if we love our work, if we have the work he wrote about, then the Russian land will continue to give birth to such geniuses. ''

310 years ago here, in the former village of Mishaninskaya, and now & mdash; the village of Lomonosovo, the future scientist, poet and organizer of science was born (the house has not survived, but now there is a museum in its place). From here, at the age of 19, without warning anyone, he went with a fish train to Moscow and never returned to his native village. Of the buildings that remember the young Mikhailo, today only the church remains. In Soviet times, the temple of Demetrius Thessaloniki was partially destroyed and desecrated, but now it is returning to life. On these days, short memorial services are held daily in it, commemorating the servant of God Michael and his parents, Vasily and Elena . & Nbsp; 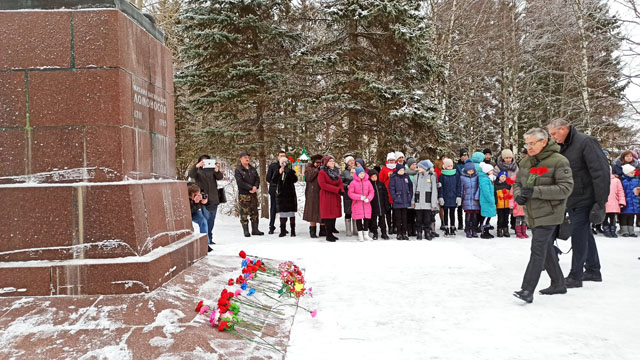 Academicians and correspondent members visited the church, visited the same museum on the site of the parental home (by the way, in the country only two museums are dedicated to Lomonosov – the second in St. Petersburg) and looked at the Kholmogory bone carving factory, where they were offered to try themselves as bone carvers. And returning by ferry to Kholmogory, we went to the local house of culture: there the traditional Lomonosov readings were held. The hall was full. The scientific director of the Institute for Linguistic Research, academician Nikolai Kazansky gave a lecture on the work on the language dictionary of Mikhail Lomonosov. Academician Viktor Rudenko , head of the Institute of Philosophy and Law of the Ural Branch of the Russian Academy of Sciences, spoke about new forms of civic participation in the modern world. & Nbsp;

This is how the village looks now, where the great naturalist and poet was born. Photo: AiF/Dmitry Pisarenko

It didn’t grow because we didn’t try it

A day earlier in Arkhangelsk, in the building of the Federal Research Center for the Comprehensive Study of the Arctic (FITSKIA) named after Academician N.P. of the Presidium of the Russian Academy of Sciences. Lomonosov's jubilee became an occasion to discuss what tasks are facing Russian science in the Arctic and what benefits this research can bring to the country. & Nbsp;

Corresponding Member of the Russian Academy of Sciences Ivan Bolotov lists what research is being conducted by the FITSKIA UB RAS headed by him: “ These are biological, ecological, radiological and seismological studies (the latter are included in the international database), the study of the peculiarities of human adaptation in the North and correction of the immune system. We are improving technologies for scientific research in the Arctic, developing and implementing methods for finding minerals, studying biological resources as an object of economic activity. '' & Nbsp;

Before the ice got up, you can get to Kurostrov by ferry. Photo: AiF/Dmitry Pisarenko

As you know, it is in high (that is, northern) latitudes that climate warming is most pronounced. Experts from the FITSKIA UB RAS are investigating how these changes are reflected in the ecosystems of the Arctic. But in these harsh conditions people are also engaged in agriculture. Suffice it to recall the Kholmogory breed of cows. Bred in the 17th century, due to its unpretentiousness and resistance to disease, it has become one of the most popular in domestic animal husbandry. It was bred (and continues to be bred) even in Yakutia and Kamchatka.

At the beginning of the 20th century, biogeographer and founder of the scientific development of the North Andrey Zhuravsky proved that in the Arctic it is possible to engage in agriculture. Proved by my own example & mdash; founded the Pechora Natural History Station, the first scientific institution in the Polar region. “ He believed that much did not grow on Pechora, not because it could not grow because of the climate, but because no one tried to grow it, '' & mdash; explains the specialist in the field of land reclamation, corresponding member of the Russian Academy of Sciences Oleg Kononov . According to him, the territory of the Arctic can be easily adapted to the needs of agriculture, but for this it is necessary to develop new varieties of plants and special breeds of animals, as well as develop adaptive agricultural technologies. & Nbsp;

Priority directions for the development of agricultural science in the Arctic & mdash; these are dairy farming, horse breeding, reindeer breeding and forage production. Unfortunately, in the field of reindeer husbandry, there are almost no scientists left who would improve the reindeer breeds. Oleg Kononov complains that no one trains such specialists now. & Nbsp;

How to make hydrogen green

The world is booming green energy. You can treat this topic in different ways, but in the next two or three decades it will definitely not lose its relevance. Therefore, it is important for Russia not to lag behind in the development of the “ green '' technologies, or even better & mdash; take a leading position in this gigantic market, which is still in its infancy and promises its participants enormous profits. & nbsp;

Many countries consider hydrogen as a key element of the future energy sector. The volume of declared investments in this industry alone is estimated by experts at 560 billion US dollars. The demand for hydrogen is growing: in 2020 it amounted to 87 million tons, by 2050 more than 500 million tons are expected. At the same time, more and more attention will be paid to the “ green '' hydrogen & mdash; its share should grow.

Hydrogen can be obtained in a variety of ways. The one obtained by electrolysis using renewable energy sources is called 'green'. It is believed that during its production there are no harmful emissions that enhance the greenhouse effect. The government of the Arkhangelsk region proposes a project for the production of this gas on its territory, namely & mdash; in the Mezen Bay of the White Sea.

“This is one of the few places in the world where the tide reaches almost 10 meters, & mdash; says the Deputy Chairman of the Government of the Arkhangelsk Region Viktor Ikonnikov … & mdash; The wind speed there is 5-7 meters per second. The Mezen Bay has a very favorable geographical position: the Northern Sea Route passes nearby, which should provide economic benefits. The location is not far from the regional center, and a developed transport system will simplify the process of energy production. '' & Nbsp;

The project has great potential: using the energy of tides and wind, the electrolysis method can produce at least 1 million tons of “ green '' hydrogen annually. Its developers are now targeting such a volume. But without the help of scientists, they cannot cope. “ The peculiarities of the ebb and flow will ensure uneven production, therefore, questions will arise during the implementation of the project. It is necessary to involve the scientists of the Russian Academy of Sciences as partners '', & mdash; Viktor Ikonnikov emphasized. & nbsp;

Alexander Sergeev promised that the Academy of Sciences would help promote the project. “ As a tidal energy project, it is quite old, since it goes back to the Soviet era, & mdash; said the President of the Russian Academy of Sciences. & mdash; But now he has played with completely new colors, and, perhaps, with the correct formulation from the side of modern science, he will find his investors. The project is extremely interesting. '' & Nbsp;