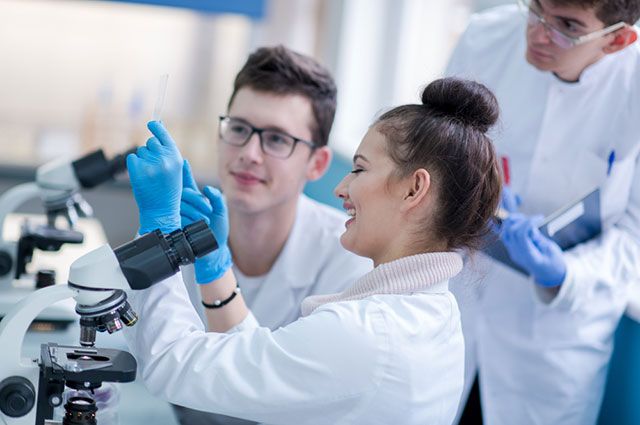 In the Year of Science and Technology, a new youth laboratory was opened in Krasnodar on the basis of the Federal Scientific Center for Biological Plant Protection, which is part of the World-class Interregional Scientific and Educational Center (REC) of the South of Russia. Among her priority projects & ndash; gentle technologies in agriculture.

The laboratory of bio-rational means and technologies of plant protection will become a new research center for young agricultural scientists of the Krasnodar Territory. It now employs 14 researchers, most of them under 27.

Among the projects of the laboratory & ndash; search and development of new ways to protect fruit crops from various viruses, diseases and pests. The fight against phytoparasitic nematodes & ndash; round worms that infect plant fruits. Another insect causing serious harm to apple orchards in the south of Russia is the codling moth. It is a butterfly whose larvae attack the fruits of apple, plum, pear and peach. Scientists plan to create a biological product for pest control that will be safe for plants and people.

Researchers are also working to protect the tomato. The head of the laboratory is Svetlana Nekoval, student of Academician Alexander Zhuchenko, one of the founders of ecological genetics of cultivated plants and agroecology. In 2021, she managed to attract more than 6 million rubles of extra-budgetary funds for research in the field of protecting fruit crops. Over the past five years, the team led by Svetlana Nekoval has received five grants, made a number of publications in top-rated scientific journals, including foreign ones, won many first places and gold medals, as well as the Grand Prix of the All-Russian Forum-Exhibition RosBioTech-2016 ;. The laboratory works closely with agricultural enterprises in the region, offering them scientific solutions for the protection of fruit crops.

REC of the world level of the South of Russia & ndash; it is a consortium of 13 universities, 9 scientific organizations, 5 development institutions and more than 18 enterprises of the Rostov and Volgograd regions, as well as the Krasnodar Territory. It was created thanks to the national project Science and Universities. in the Year of Science and Technology, and its task is & ndash; the introduction of innovative practices in agricultural enterprises in southern Russia and the creation of environmentally friendly innovative solutions for the global food market. Profile research is carried out in the field of the agro-industrial complex, resource-saving energy, industrial and medical biotechnology, as well as the development of aquaculture. And promising areas are the digitalization of monitoring of agricultural land, methods of soil fertility management using the Internet of Things technologies. and the creation of forage crops for animal husbandry.

Six more youth laboratories in the Year of Science and Technology were opened on the basis of universities participating in the Crimean Scientific and Educational Center of the world level “ SeaAgroBioTech '' … About 270 million rubles will be allocated for their activities within three years.

The laboratory “ Robotics and Intelligent Control Systems '' was opened at Sevastopol State University. Engineers create advanced information and control systems for underwater robots with manipulators. This will increase the functionality of such machines and expand the areas of their application, and in the future will change the market for marine technologies and research in the field of the study and development of the World Ocean.

In the recently opened laboratory of molecular genetics and biotechnology of the Crimean Federal University (KFU) named after V.I. Vernadsky will develop four scientific directions. All of them are relevant not only from a research point of view, but also have a predictable economic perspective. Due to the pandemic, investor interest in antiviral vaccines has skyrocketed. An oligonucleotide anti-coronavirus vaccine developed at the KFU named after IN AND. Vernadsky, has already passed several stages of preclinical tests and has shown its immunogenicity in a number of independent organizations. The center is currently working on a DNA drug project for the treatment of melanoma, rheumatoid arthritis, gastritis and other diseases.

The laboratory, created on the basis of the Institute of Biology of the Southern Seas of the Russian Academy of Sciences, is engaged in projects related to the ecological immunology of aquatic organisms. Among its main directions & ndash; fundamental research in the field of immunity of commercial species, first of all, bivalve molluscs cultivated in the Black and Azov seas. The work involves an assessment of risks due to climate change. In addition, scientists are striving to find out how marine organisms acquire resistance to the effects of infectious agents of various natures, as well as to develop lines of mollusks that are resistant to adverse environmental factors.

And in the laboratory of cell biology and anatomy, opened in the Nikitsky Botanical Garden, organs, tissues and cells of plants grown in vitro (in vitro) on nutrient media with different concentrations of growth regulators are studied. In addition, scientists will conduct a genetic assessment of plant material using molecular markers. This will significantly improve the quality of crops grown.

Six youth laboratories will soon appear in the Chelyabinsk Region. A laboratory has already opened at South Ural State University (SUSU), whose employees, together with enterprises of the Chelyabinsk and Sverdlovsk regions, will create propulsion systems for a large-scale space project. Yuri Kapelyushin, a young candidate of technical sciences, became the head of the research department. He and his colleagues will look for ways to improve the missiles to make them cheaper than their foreign counterparts.

SUSU & ndash; is a university of digital transformation, where innovative research is carried out in most of the priority areas of science and technology. In the Year of Science and Technology, he became one of the participants in the Priority & ndash; 2030 University Development Program.